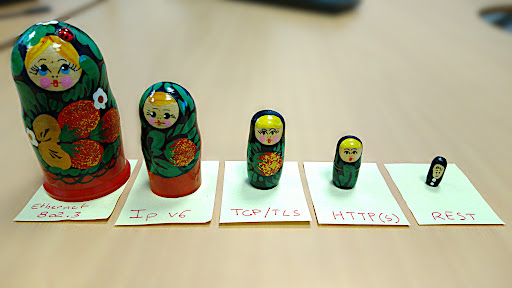 What is IPV6 and Why You Should Care

I remember debating which protocol would dominate networking.  Would IBM embrace IP over their SNA and Token Ring?  Was Netware, then the dominate network system, going to support IP?  Was Banyan Vines going to become more popular outside of certain government networks?  Would ATM make the WAN and LAN distinction irrelevant?

That there would be an IPV6 wasn’t even in our imagination. When IBM selected IP, the die was cast.  And when the Internet became public, on April 30, 1993, the protocol debate was settled.

In 1993 no one thought the 4 billion possible IP addresses would be exhausted in their lifetime.  The early pioneers snatched up millions of addresses just for their own use because they could. No one really seemed to worry because there were billions of unused addresses.  IP addresses themselves did not cause a gold rush.

With the evolving use of sub nets and lower cost routers, one public IP address could be used to support a network of 10’s of thousands of users. So there was not a lot of worry about running out of addresses, even though work was proceeding on the next generation, IPV5 and IPV6. 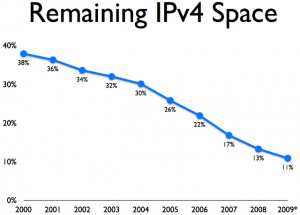 But as the Internet exploded, so did the IP address use.  By 2010, only about 10% of the addresses remained.  And by 2016, we were pretty much out.  No new addresses could be assigned.  That is, an organization such as your ISP could not get any more to assign to you. They had to make due with the block of IP addresses they had already been assigned. The initial Internet vision of every host having it’s own IP address became impossible with IPV4.

With the Internet of Things, mobile devices, OTT streaming video players, tablets, and even vacuum cleaners, toys, and toasters, IP addresses are in demand and there simply are not enough to go around,  In fact, there are no more.  Well, there are some more but they are second-hand.  Harvesting unused addresses from large organizations (MIT, IBM,and other early Internet pioneers), and carefully reusing existing inventory has allowed the IPV4 addresses to continue.  But we are coming to the end and we’ve know it for a long time.  That’s why there is the IPV6 address space.

CEN Shows How to Migrate to IPV6

At a 2017 Connecticut Educational Technology commission meeting, we talked about IPV6 migration.

We were out of IPV4 addresses for the Connecticut Education Network (CEN), where I’ve played a role since its inception.  And we are teaching network users how to migrate to IPV6.

IPV6 – To Infinity and Beyond

There are many reasons to switch to IPV6, including easy subnetting, easy filtering, no need for NATs, security is built-in, and much more. There are only two disadvantages that I can think of:

And of course, all of my network gear has to know how to work with IPV6.

The Future of IP Addresses

As I write this, my ISP (Comcast) has provisioned my router with an IPV6 address.  It never needs to change, so I will never need “DyDNS” or similar tools.  My DNS provider supports IPV6 so any domain I own can be reached with an IPV6 address.  Windows and Linux both support IPV6.  Maybe you are already using IPv6 at home but didn’t realize it. We’re in the process of adding IPV6 support to the DiscoverVideo appliances.

If you are not already using it, brush up on IPV6. You’ll be glad you did.

Please give me, Rich Mavrogeanes, drop me a note at sales@discovervideo.com.

Closed Captions For All
March 30, 2022
Recents Posts
Go to Top